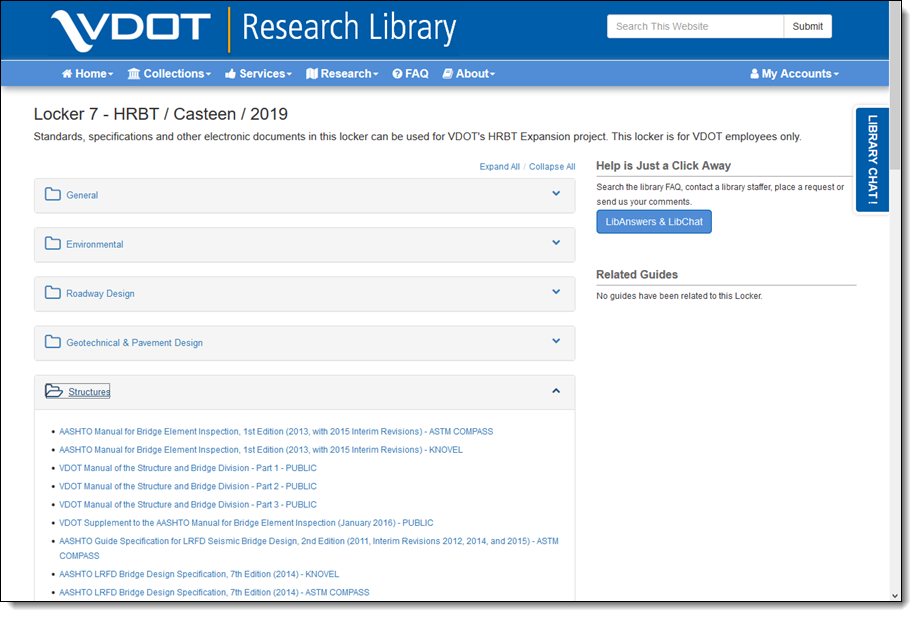 This image shows the password-protected HRBT locker for VDOT employees, with 12 folders and 179 items.

In March of 2019 the library was contacted by VDOT employees Phillip Casteen and Jacob Brown, members of the Hampton Roads Tunnel Bridge Expansion project, a 6-year $3.3 billion construction project considered the biggest in VDOT's history. They requested library support on behalf of a team of 10 employees on the VDOT's HRBT expansion team.

The team needed secure online access to hundreds of technical documents. They wanted the library to find (or purchase), organize, and make those resources accessible in one place. They also wanted to make much of it accessible to a group of non-VDOT contractors, and the library was asked to find a secure and copyright-compliant approach to this difficult task by April.

Library staff sprang into action, collaborating with the patrons to understand their needs, starting with the information required. We took a spreadsheet list of about 350 citations and tried to determine accessibility status, and find links and descriptions.

Discussions between library staff and the team revealed how complex and difficult a task it would be, but Gil Kenner and Barb Neyman set about finding electronic versions of the needed items (most of which were accessible via library subscriptions), while Ken Winter helped repurpose the library's E-reserves and document management system and rechristen it "Library Lockers." Ultimately, we decided to create two lockers:

VDOT LOCKER (Password protected for select DOT employees): The locker had 13 folders with a total of 193 documents. Those documents were from a wide variety of sources, including VDOT's licensed databases like: InsideVDOT, Knovel, ASTM Compass, ASCE Library, in addition to files from InsideVDOT and copyright compliant files stored on the library's servers.

CONSULTANT'S LOCKER (Publicly accessible for VDOT consultants given the URL): This locker contained 13 folders with 126 digital documents. Those resources were primarily publicly accessible files that were copyright compliant, which were given to the library in digital formats to put on library servers. We chose this option instead of linking to public URLs because those links can break over a multi-year period.